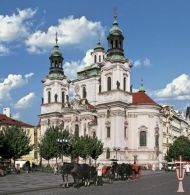 The Church of St. Nicholas is one of the oldest churches in the Old Town area of Prague. It is mentioned in sources as early as 1273. It was originally a parish church and had a long tradition as a centre of preaching, with Milíč of Kroměříž, Matěj of Janov (small village near Tábor), and other representatives of Hussitism and the Reformation all preaching here.

In 1635 the church came into the possession of Benedictines from the monastery of Emauzy na Slovanech, who started to build a monastery there. The construction of the monastery lasted from 1727 to 1730, and when it was completed work was started on a new church, which was finally completed in 1735.

The plans were drawn up by the famous prague baroque architect Kilián Ignác Dienzenhofer. The front of the church originally looked onto a small square known as the “Hen Market”, and the church was surrounded by other buildings, which have since been demolished. It was therefore not originally designed to be seen from a distance, something we must bear in mind when we see it today in the open space of the Old Town Square. Dienzenhofer had to take into account the limited space in which the church then stood, and designed it as a cross-shaped structure combining a central and a longitudinal ground plan, surmounted by a copula.

The church of St. Nicholas in the Old Town is one of his crowning works, and the complexity of configuration of its interior together with its interesting lighting scheme and picturesque plasticity combine to make it one of the most suggestive church interiors in Prague.